We just completed our second 24 Hours of Lemons race last weekend. We ran the Real Hoopties of New Jersey 2013 race which was in Millville, NJ Aug 10/11. We previously ran the Loudon Annoying race at the New Hampshire Motor Speedway.

At the NH race we had a small engine fire during testing which led to a scramble to replace our distributor cap and wires (Which were melted completely), and also had to do a water pump on the car just as the race was starting which delayed us a few hours. After these set backs though the car ran for the remainder of the weekend, albeit with worsening power loss.

The race was essentially a disaster, although we did earn a fair amount of street cred for our mechanic work. The guys towed the car down on Thursday night and were ready for test and tech on Friday morning. They ran all day but had severe power issues with the car. On Saturday right before race start we replaced the fuel filter and after starting the race it was apparent that the filter had been the source of our power issues. Another hint was when we disconnected the fuel lines what came out of the filter resembled swamp water.

Things were looking up at this point but tragedy was at hand. Rob ran around a twenty laps in the car (only spinning once during that time) and then came in with no issues. We swapped drivers and I took it out. Things were going well until after around 15 laps the oil temp started to increase drastically with the gauge showing ~320F! I brought it in and the engine was emitting a terrible clatter which sounded like rod knock. Coolant temp was fine but oil temp was sky high. We let it cool down to reasonable temps and the clatter quieted down. We sent Chris out but he didn’t even make it one lap. The engine exploded just as he exited the last turn. Back in the pits we dropped the oil pan and confirmed that the #3 piston had shattered into a thousand pieces and taken out the cylinder wall. That was only the beginning of the weekend’s shenanigans though!

Searching on car-part we found a listing for a used engine in PA around an hour from NJMP. We called the guy up and he told us that he had previously sold the engine to a dealer in Florida who had serviced it and installed it in a customers car, but that they had returned it to him for a refund. He said it was a low miles engine and didn’t know why they sent it back. Sounded suspect but it was our only option. We sent Rob and Chris out to retrieve the “new” engine and meanwhile Greg and I started yanking the old engine. We had the old engine out in around 2 hours, only a half hour before Rob and Chris returned with the new one. We had to swap over a number of parts from the old to the new (custom oil pan, intake mani) which took a little while but we had the new engine back in the car in around 7 or 8 hours. It was midnight at this point and our spirits were up. We put oil and water in the car and it immediately began leaking both fluids. Inspection revealed that it was coming from the head gasket. We had discovered why the engine had been returned! Luckily we had a new head gasket for the 4AGE on hand so we set about changing it out. 4 hours later we had it back together again and filled with oil and water, but the car wouldn’t start! It was clear that something had been hooked up incorrectly but the team was just too tired to keep working. We took showers and napped for an hour or so then came back to figure it out. Chris and I discovered that we had forgotten to hook up a connector in the trunk, and it fired right up!

Sadly our efforts were not to be justified. We had gotten running just as the race started and went right out on the track. 3 laps later it started overheating and Chris brought it in. We let it cool down, rebled the cooling system and tried again with the same result. We could not turn more than 3 laps without overheating. We essentially ran the whole day like this, doing 3 laps then coming in for cooling down. We tried various bleedings, flushings and even removed the thermostat from the engine, but nothing worked. It is possible that the head gasket did not seal properly since we didn’t machine it, but hard to say. The car ran quite well otherwise and was making good power.

Our final result was 130th out of 139, which means we weren’t last! An unfortunate race since so much effort went into fixing the car without many laps to show for it. Next race we plan to run is at the end of October at NHMS. We are going to abandon the little 4AGE for the next race. They are just too hard to find and even when running well don’t put out much power. Going in its place is a 90’s Toyota V6 (the 1MZ) which should put out almost double the power. This is a moderately difficult swap but one that has been undertaken by quite a few people so there is a good amount of documentation online. 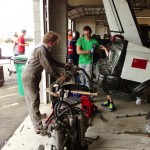 Greg and I considering our next move (from lemons forum) 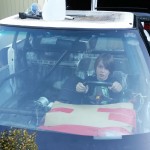 Getting his head in the game 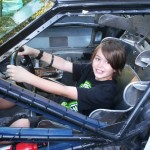 Avi is ready to drive the racecar, he just can’t reach the pedals yet! 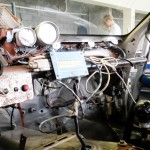 This race we installed my old LambdaBoy wideband. It is over ten years old and at the time was state of the art. Now it is a dinosaur but still works great. Fits the lemons car motif as well! 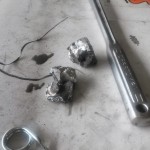 Some of the larger piston fragments from the engine explosion. 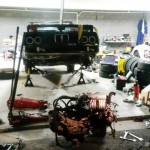 “New” engine ready to go in