After our extreme 4AGE failure at the last race we decided to go forward with our engine swap project. After visiting the junkyard and researching online we settled on an early model 1MZFE engine. At my favourite u-pull-it junkyard (Henry’s Used Auto Parts in Blackstone, MA) there were around 25 of these engines available. Most were in Avalon’s but some in Camry’s or ES300’s. We settled on a ’97 unit which was mostly complete and had only 115k miles. Some of the Avalon’s there had over 350k, so this one should last us quite a while!

Our swap plans in bullet form:

All the 4AGE parts went on craigslist and made back almost $500. Coupled with our residual value from the judges of $150 we should be able to easily do this swap for under a $500 total value. As of this writing we still have the old MR2 C50 transmission, 3 ECUs and a bunch of other new parts for sale.

We took the valve covers off the 1MZ and checked out the oil pan and compression. Everything looks great. No sludge at all (which can be an issue with these engines). Should be a runner! Hopefully we’ll do some test-fitting of the engine this weekend. For now it is sitting on the engine stand awaiting new cam and crank seals from rockauto (which do appear to be leaking). 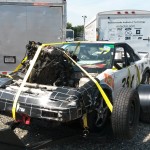 Transporting the 1MZ required “temporary installation” in the MR2 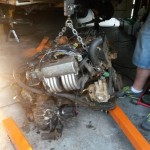 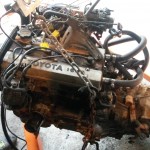 The old 4AGE right before it was sold.