Finally finished the engine mounts for our 1MZ into AW11 Toyota MR2 swap. Most of them were made from bits of the old AW11 engine mounts which seems to have worked just fine.

For the transmission end mount, the AW11 mount was used unchanged. It bolted up fine to the S54 transmission so we just used it

For the torque engine mounts we used the AW11 mounts but both had to be spaced down with some 1/4″ thick flat stock. I just bolted some 6″ piece or so to the transmission then tacked the old aw11 mounts in place. The chassis brackets on these mounts were then redrilled, but pretty easy.

Pictures below. Most of it is pretty straightforward. We also filled the mounts with urethane construction cement to maximize NVH (and minimize engine movement). The old mounts were shot anyways and we have no budget to get new ones… so a $5 tube of urethane from Home Depot will have to do!

Next up is the exhaust… 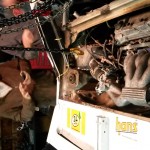 Engine is fully bolted in! Intake and airbox clear as well. 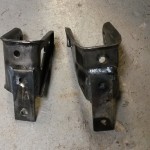 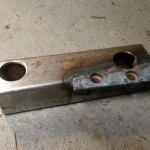 Engine side mount for 1MZ swap 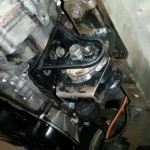 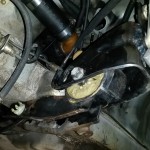 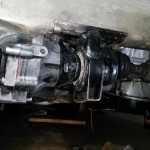 Another view of rear torque mount 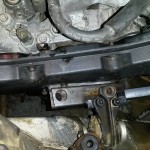 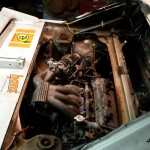