After I burned out the LED driver on my driver board my LED tail light project has been sitting for a while. I replaced the driver chip on the driver board and it was back in action. Still not sure why it blew out in the first place though (highly suspect) but it could have just gotten shorted or otherwise “mechanically compromised” since it was just sitting in the compartment under the seat. This time around I wrapped it in a great deal of electrical tape!

Pictures below of the reinstalled tail light. I wired the power to the board to the moped’s unregulated tail light power line, which causes it to flicker when the bike is idling low, but that isn’t too big a deal. It also means the brake light will not operate if the lights aren’t on, but I don’t think this is too big a deal since I always ride with the lights on. The brake light line was wired through a pullup resistor that sets the light as max brightness (very BRIGHT: 18W of red LED goodness).

We’ll see how long it lasts this time. Last time I had it installed on the bike for unknown reasons it stopped working after a few rides (blown driver chip). Possible that the moped electrical system is too noisy, but the device manufacturer assured me that it was “almost impossible” to damage the device unless there were mechanical shorts introduced. 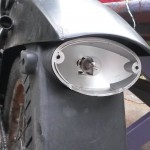 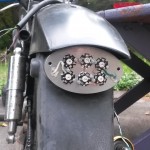 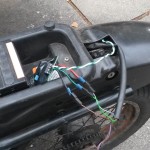 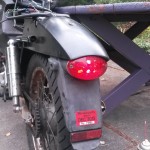