Since I have owned it the 190E has had a variety of annoyance level running issues. Initially it was virtually impossible to start but ran fine once it got hot… I later realized the ECU was unplugged! Turns out with CIS the ECU is really only there to do startup enrichment and cold start stuff. Lately the car has started fine but won’t stay running when cold AT ALL. Ie it fires on the first crank, revs to 1500ish, then dies immediately. Keeping it going when cold is an exercise in throttle feathering, but once it warms up it usually stays idling fine but the idle speed is a bit erratic. I had previously fixed a number of broken wires, cleaned the idle valve and cleaned all the relay and fuse contacts, but seen little improvement.

Before the winter set in and I parked it for the impending snowfall I noticed that the ABS light was on intermittently. Reading around on the internet I discovered that this is a telltale sign that the OVP relay was having issues. The OVP relay is essentially a voltage and current limiter for the fuel injection ECU and the idle valve! Other symptoms of a failed OVP are a failure to idle properly when cold and essentially all the symptoms I have been seeing!

Having resoldered many a relay in the past with good success I decided to try to repair it before slapping down $50 or so for a new one. I cracked it open using a few miniature screwdrivers to pry on the crimped tabs. Once opened I discovered a very simple circuit inside with a large zener diode, a few discretes and a small PCB mounted relay. In a few minutes I reflowed these joints and sealed it back up with some RTV. Hopefully this will fix some of my long term gremlins.

Will update this when I get a chance to test the fix. In the meantime the car has no camshafts installed as I am waiting for valve shims! 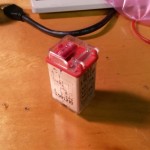 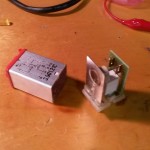 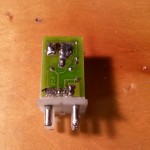